Talking with Kids about Racial Injustice

When I was young, my mother and I lived in eastern Texas. We enjoyed our lives there, feeding our neighbor’s horses, eating wild blackberries, and living surrounded by nature. Until James Byrd Jr. was murdered by a hate group near our home on June 7, 1998. My mother moved us across the country in hopes that I would live a full, happy life. We wound up in Saint Paul, Minnesota, where I found the arts and went to much more diverse schools. But I also grew to see that cruelty toward Black people was not just a southern issue.

Beginning in elementary school, I was treated differently in classes due to the color of my skin. In high school, I watched resource officers use unneeded force on Black teens regularly. As an adult I, along with many other Black people, have experienced countless traumas as Black folks around the nation are murdered by police.

The Minneapolis-Saint Paul metro area is one of the most unequal cities in the nation in terms of wealth, education, and police violence. Today, the median Black family in the Twin Cities area earns $38,178 a year—which is less than half of the median white family income of $84,459 a year. Also, the incarceration rate of Black people in the Twin Cities is eleven times that of white people, despite Black people only making up roughly one-fifth of the population.

The Twin Cities has lost many Black lives at the hands of police. While only 20 percent of Minneapolis’s population is Black, roughly 60 percent of police-reported uses of force target Black people, the most high-profile of these cases being Jamar Clark (murdered November 15, 2015), Philando Castile (murdered July 6, 2016), George Floyd (murdered May 25, 2020), and Winston Smith (murdered June 3, 2021). When George Floyd was murdered by Minneapolis police, our city and our nation had finally had enough. Minneapolis’s Black folks and their allies demanded justice—but those demands were met with more violence at the hands of police and hate groups. During the racial uprising, it became clearer than ever that the police were more interested in protecting property (and white supremacy) than they were Black lives.

What kept many people going each night was the promise of the sun rising in the morning and the support of the community.

Minneapolis came together in a way I had never seen. Strangers became neighbors, neighbors became friends, and plans were made to protect as many people and homes as possible. Without the police to count on, a city came together to keep one another safe. It is more important than ever to take care of each other and speak out against injustice—in our homes, schools, neighborhoods, states, and nation. When we cannot trust the police to protect us, we must keep each other safe.

How You Can Help

There are many ways to create change in your communities, from small acts of kindness to big gestures of solidarity.

Talking about racism and police violence with kids is not a one-time conversation. If you need more resources, connect with an educator, librarian, or local activist with experience in talking about racial injustice with kids. There’s a community of people around you ready to help. 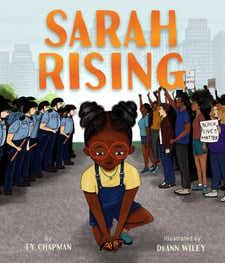 This essay is a reprint of the Author’s Note in Sarah Rising.

Ty Chapman is a Twin Cities-based author, poet, puppeteer, and playwright of Nigerian and European descent. He is passionate about art that speaks to the Black experience in America. His recent accomplishments include being named a Loft Literary Center Mirrors and Windows fellow and publishing poetry through multiple journals.