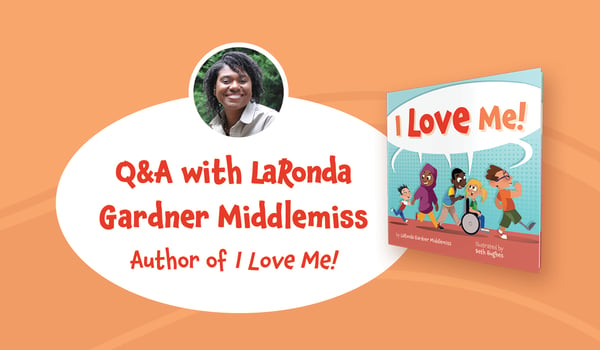 LaRonda Gardner Middlemiss is the author of I Love Me! We chatted with her to learn more about the inspiration and process behind this affirming new picture book.

When did you first know that you wanted to write children’s books?

In 2015, while cleaning the house and thinking about my son, out of nowhere the words for a picture book popped into my head. That was the initial spark.

Why was it so important for you to write this particular book? What was the inspiration?

I was teaching my son to say and sign (using American Sign Language [ASL]) I love you, but instead he would say I love me. Those words stayed with me. And I began to think about how important it is to teach kids to love themselves, as they are, before society and outside influences start telling them they aren’t good enough. It began as a little singsong rhyme I’d do as I was teaching him his body parts. I kept adding more lines and at some point I wrote it down and started thinking it had picture-book potential.

How close is the final version to your very first draft? Did the manuscript evolve a lot through the editing process or is it close to your first version?

Most of the original manuscript remains. Maybe 90 percent. All of the main points that I wanted included are there, and most importantly, the spirit of the manuscript never changed. The I Love Me! refrain that’s repeated throughout was not in the original manuscript. A critique partner actually suggested I add it at the end of each couplet and that’s how it was submitted to Beaming Books. Then through the editing process it was pared down to just a few times throughout.

What was the most challenging part in writing this book?

Suspending the singsong way that I said it with my son. This was crucial in order to sort out the meter to make it more book-friendly. I had been saying it with him for quite some time, so I became a little attached to it. Saying or singing something doesn’t always translate well into written text, nor does it provide the best meter, especially because when spoken, you can bend words, add cadence, and provide emphasis that doesn’t show up on the page.

The art in this book openly embraces diversity, celebrating it in many ways. Was that your vision from the beginning?

I always wanted the book to be inclusive in a really bold way. Many times, when we see or hear diversity discussed, it seems that there are just a handful of images and types of diversity that get used as a catch-all. For me, I always wanted to be explicit about the many diverse attributes that typically don’t get recognized. I wanted children to see themselves on the pages, not just by proxy of other unique diverse features, but with as many representative examples as we could. I was fortunate that the editor believed in that vision. With a few notes, Beth Hughes, the illustrator, really embraced the idea and brought it to life in a fun and beautiful way.

What does it mean to you to have your book published by Beaming Books?

It means a lot to have something I wrote with the purest intent gain the attention of a publisher and become an actual book that can reach many. It’s a fantastic feeling.

What is the one thing you’d like kids to take away from this book?

To love themselves, let the words connect with their spirits so it rings like a little mantra inside, and have fun!

To learn more about I Love Me!, click here.

LaRonda Gardner Middlemiss is a picture book author who formerly worked as an engineer in corporate America. Her son's love of story time, which for him meant any time, immersed her in the wonderful world of picture books. Enjoying books with various themes and approaches to storytelling, from the quirky to the quiet, eventually inspired her to begin writing stories of her own. When not busy battling wits with her husband or having fun with her son, she enjoys listening to children's book themed podcasts, gaining insight from NPR, and watching movies. She also likes creating art and hopes to someday illustrate her own books. LaRonda writes books to entertain, enlighten, and empower children across the globe. She resides in Kernersville, North Carolina.