The first time we saw Jack, he was sitting with a bunch of other dogs, available for adoption. My wife and I hadn’t been married for long and we were getting ready to move to a different state so I could start graduate school. We weren’t getting a dog.

He had the look of a scruffy Hollywood dog who finds himself far from home and survives any number of adventures to get back to his owners. Probably a Jack Russel terrier, but larger—as if created in a mad laboratory. The volunteer assured us he would be adopted within the hour.

In truth, we didn’t have the money to bring home even the most secondhand of dogs. So I put him out of my mind until we found ourselves back at the Humane Society a month later and I heard my wife yell my name.

Jack sat perfectly still in a crowded pen. He cocked his head to the side—that’s when I knew I was in trouble—and stared at us intently, as if to say, “What took you so long?” My wife was already talking to the volunteer, who told us Jack had been returned two different times since we’d last seen him for peeing in the house. I looked back to Jack, who cocked his head the other way like, “Who you going to believe, me or her?”

My wife signed the papers without a second glance at me.

Jack grafted into our lives immediately. He moved with us from North Carolina, to Tennessee, back to North Carolina, back to Tennessee, followed by stints in both Oregon and, finally, Minnesota. He was there through the birth of two kids—who he guarded fiercely, despite them replacing his spot on our laps and eventually the couch he loved—two graduate degrees, six different houses, and pretty much every other major moment we experienced since 2000.

And he never used the bathroom in the house, not once.

And then one day we came home, and he had peed in the living room. We chastised him gently (of course he understood) and laughed about him being an old man—close to 18 years old, at that point. That night, it happened again. And then again, the next day. We took him to the veterinarian and learned that he had stomach cancer and had, more than likely, only a few months to live.

To say that Jack was loyal is both a cliché and an understatement. He never pulled me from a rushing river or came sprinting down the block to fend off a bully. But loyalty is almost never measured in extravagant, big moments. Instead, it is remarkably ordinary, born out of routine and presence and, of course, connection. And connection is risky. It’s the opposite of selfishness—of safety. It requires you to give when you don’t want to and to make choices that go against self-preservation.

I can’t say that I was any more loyal to Jack than any other responsible dog owner. We kept him fed, groomed, and took him for regular check-ups. But when the time came to choose between a risky (and painful) surgery that might extend his life a year and giving him a painless and dignified death, the choice wasn’t easy.

But it didn’t take long, either.

Because loyalty is also about giving when you don’t want to. It’s about doing what’s right, even when it hurts. And sometimes it’s about stuffing your own emotions and fears behind a fake wall of courage in order to say goodbye. 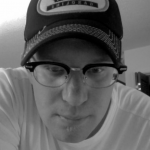 BRYAN BLISS is the author of three young adult novels. More importantly, he is the father of two children, both of whom think he is the wisest and funniest person who has ever lived. He lives with his family in Saint Paul, MN.

Bryan Bliss is a veteran youth pastor, curriculum developer, and novelist. He lives with his family in Saint Paul, Minnesota.