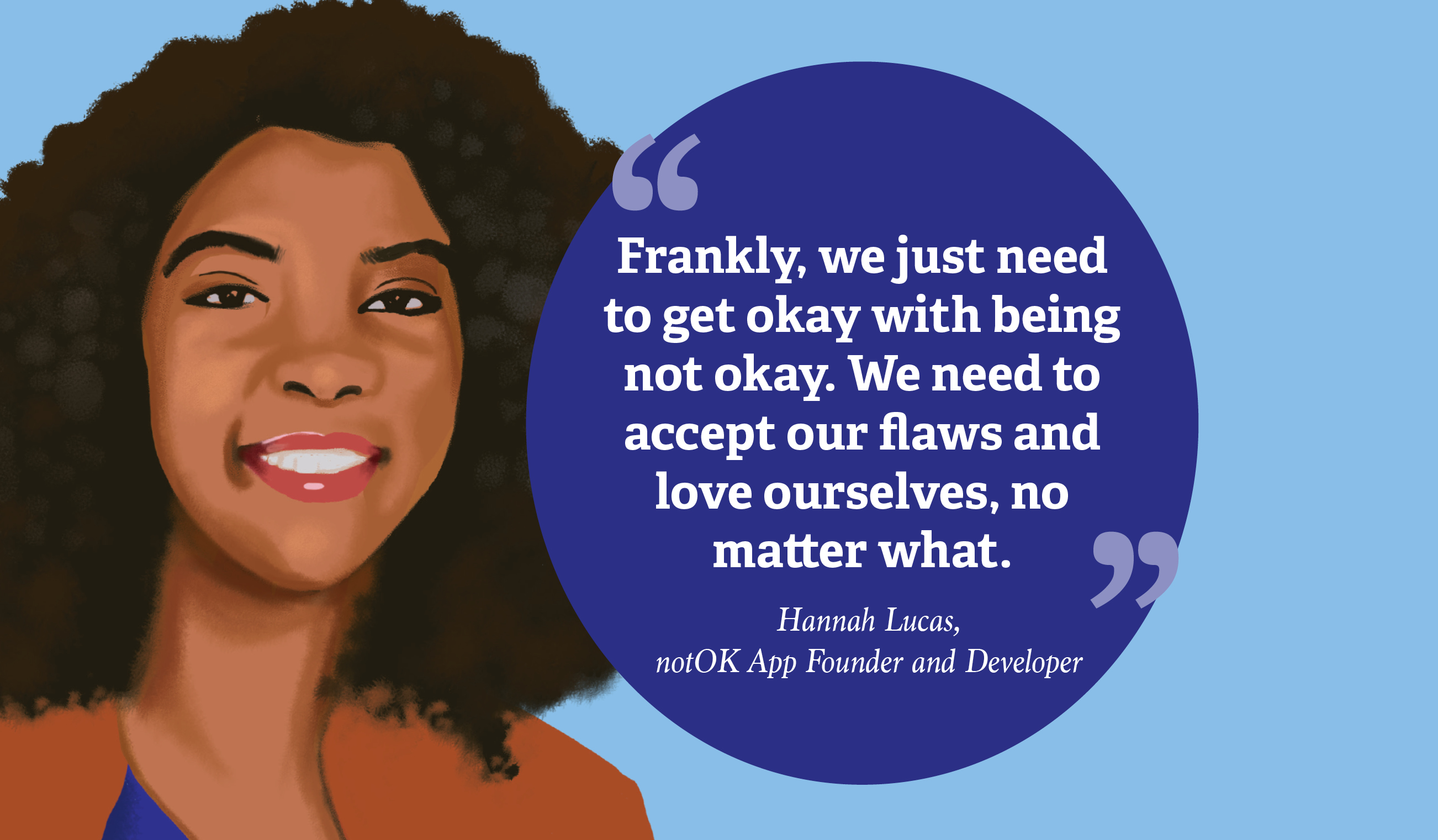 One evening when Hannah Lucas’s mother was getting ready for bed, she stopped at the top of the stairs to check on her daughter. She knew 15-year-old Hannah had been facing bullying and harassment at school, and that she was warding off depression and despair. But Hannah’s mother didn’t know how deep that despair was, nor that her daughter believed there was only one way to escape the unbearable pain.

Hannah’s mother opened the bedroom door just as Hannah was putting a handful of pills into her mouth. She ran over to her daughter, grabbed her, and took the pills out of her mouth. At that moment Hannah said, “I don’t want to be here anymore. I can’t take it anymore.” Then she said something that would change the course of her life and many others’: “I just wish there was a button I could press!”

In that moment of desperation and anguish, Hannah had a vision.

With the help of her mother, Hannah survived the night and lived to share her experience. Now, Hannah helps others who find themselves in the same state of hopelessness.

Hannah Lucas is a survivor with a story to tell.

For most of her childhood, Hannah was a competitive gymnast. But shortly after leaving the sport, she began to experience symptoms of a chronic illness. It all started with severe headaches. Over time, the illness worsened. One day, the school nurse called Hannah’s mother to tell her Hannah had passed out. Eventually, Hannah began passing out almost every day, and her mother would have to pick her up from school.

Doctors could not figure out what was wrong with Hannah. While they were concerned, some doctors didn’t believe the things Hannah told them about her symptoms.

Hannah’s experience—as a Black teenage girl being misdiagnosed by white medical professionals—is one case in the larger story of Black girls’ and women’s health and medical outcomes being endangered by a medical establishment that’s not designed for them.

As a result of her illness, Hannah became a victim of extreme bullying, harassment, and threats in high school.

“I would hear people talking about me—and I would be standing right behind them—saying, ‘Yeah this girl is so weird, she has seizures.’”

Hannah was a good student, and also the only Black girl in her class. She believes that’s why she was the victim of bullying. In addition to making fun of her illness, white students would make fun of her hair and say the N-word around her.

Even though she had been an honors student, Hannah began having a difficult time making it through her classes. Her illness resulted in brain fog. Between that and the increase in bullying, she struggled. By the end of her first year of high school, Hannah had missed 196 classes due to her condition.

Hannah’s depression got worse, which led her to struggle with disordered eating. She would go days without eating and then binge eat until she vomited. From there, she began to self-harm.

She began to bleach her skin to try to get lighter.

Hannah’s mother knew her daughter was struggling; she just didn’t know the depths of her emotional struggle. “I witnessed her completely just wither away every single day. Her light just dimmed,” Hannah’s mother recalled.

Hannah’s tipping point was the guilt she felt about the toll her illness, the bullying, and the resulting depression had taken on her loved ones. Not only did she have her own pain, but she also couldn’t help but feel like she was the source of her mother’s pain.

After years of battling depression, Hannah decided that the only way to ease both of their pain would be to die by suicide.

“That night, my mom saved my life. When she was holding me, I just remember my thumb.” 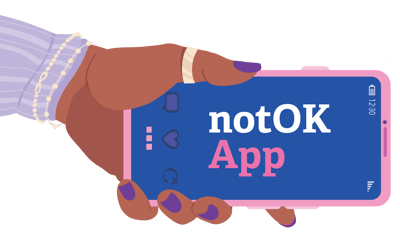 That night, Hannah understood that others who are in emotional, mental, or physical distress may not be as fortunate as she was to have someone there to help save them. In her moment of despair, Hannah had a vision of herself pressing an app on her phone with her thumb. She imagined a digital panic button someone in need could use to call out to a loved one for help.

“I just wanted something that I could physically press that wasn’t a life alarm necklace. I just remember wanting an app on my phone that I could press.”

A little over a week after the incident, Hannah could not get the idea of the app out of her head. She realized that, if she were ever in that position again, she wanted certain people to know she was not okay, and she wanted them to know where to find her. For Hannah, it would be something that she could use for both her mental illness and her chronic illness. She knew this vision would benefit not only herself, but also others who found themselves in a similar position.

When Hannah’s research determined that an app like that didn’t exist, she told her 12-year-old brother, Charlie, about her vision. Charlie had taught himself how to build apps and programs at 7 years old, so he already had the basic skills to help realize Hannah’s vision.

Once Charlie was done with the preliminary programming, the siblings created a fifteen-page presentation about the app to demonstrate to their parents that they were serious about the endeavor. Then they found developers to help. While Charlie worked on refining the app, Hannah worked on the business side, helping to secure an LLC and deciding how to best market the app. She also entered into intensive therapy and life coaching to help with her mental health.

When it was time to launch the app, Hannah and Charlie named it notOK—because, as their slogan says, “It’s okay to be notOK.”

The notOK app is a digital panic button that, when pressed, sends an alert to up to five of the user’s pre-selected contacts to let them know the user is not okay. The app automatically sends out the distressed person’s current GPS location and directions. Currently, the app has more than 70,000 users. Users have hit the notOK button at least 50,000 times.

The website for notOK lists Hannah, Charlie, and their dog Trooper (whose responsibilities are listed as “emotional support and encouragement”) as part of the notOK team. The website also lists important facts about mental health.

It includes information about support groups and resources for those struggling with mental health issues, alongside the option to download other apps.

Since the app’s launch, Hannah has emerged as a spokesperson for Black women’s mental health. She and Charlie have been invited to speak and interview at events and organizations. Hannah attributes part of the app’s appeal to the fact that it takes the guesswork out of asking for help. In our society, there remains a stigma around asking for help; according to Hannah, we should normalize it.

Hannah’s app draws us one step closer to normalizing seeking help. And the app’s users are grateful it exists. One user wrote,

Hannah and Charlie—and Trooper the dog—are doing just that. They are in the business of saving lives.

What we can learn from Hannah Lucas

In one of the most difficult moments in her life, Hannah Lucas had a vision. She not only saw herself pressing a button that would save her life, but also envisioned other people in a similar position who would one day use that button to save their own lives. Hannah is part of a long ancestral line of Black women visionary leaders. Women like Harriet Tubman, Dorothy Height, Shirley Chisholm, and Oprah Winfrey are just a few Black women whose visions helped positively change society and influence the world. Can you imagine the future you want to create?

It's Okay to Not Be Okay

It's Okay to Be Unique

It’s okay to be unique. Uniqueness is being unlike anything or anyone else. Every individual has something unique about them, whether it’s in their physicality or their personality. God designed our makeup with intention and gave us all permission to be unique. Hannah demonstrates that our uniqueness should not be hidden away. Our individuality is one of the greatest assets we can offer this world. You are the only one of you in the world.

It's Okay to Love Yourself

Self-love sounds like a simple concept, but it proves difficult for many people. This is because it requires ignoring or removing the harmful stigmas of outside influences. Oftentimes, outside voices and opinions can have tremendous effects on our self-worth. However, it is our opinions of ourselves that matter most. “Learn how to love every single aspect of you,” Hannah advises. “Learn how to love the very essence of yourself, and then it’ll make whatever you do in life that much easier because you won’t care about how people perceive you.” 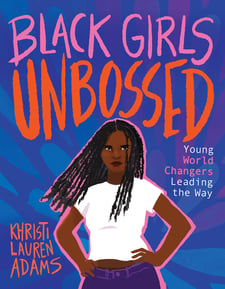 This is an excerpt from Black Girls Unbossed chapter 3: “Looking to the Future: The Vision of Hannah Lucas.”

Khristi Lauren Adams is a speaker, advocate, ordained Baptist minister, and award-winning author of Parable of the Brown Girl. She is the founder and director of The Becoming Conference, designed to empower, educate, and inspire teenage girls. Her ministry and youth advocacy have been featured on CNN, and her work has appeared in Huffington Post, Off the Page, and the Junia Project. She is currently the Dean of Spiritual Life & Equity at The Hill School in Pottstown, Pennsylvania.