Social Studies, a Yardstick, and a Little Kindness

It was late in the school year when I got a phone call from my son’s 6th grade Social Studies teacher. It seems that for most of the year, my son, Isaac, would start each class period by walking behind her desk, taking her yardstick off the shelf, and bringing it back to his seat where he’d keep it for the class period. Yeah, I don’t get it either. But it had become a thing and all the kids in the class knew this was a little shtick between my son and his teacher.

But that day, she had jokingly told my son he needed to give the yardstick back--she actually needed it for something—and the rest of the class booed. My son knew they were joking. The teacher knew they were joking. But another boy in the class, a boy with some special needs, didn’t understand the joke. He was upset that the other students were being mean to the teacher and started to cry. This being a class of 6th graders, things got a little loud with some kids laughing and the teacher trying to calm everyone down. In the midst of this, my son, my sweet, tender-hearted son, got out of his seat and walked to over to this boy, knelt down, looked him in the eye and explained that the kids were joking, that the teacher wasn’t mad, and that everything was okay. Then he quietly returned to his seat, picked up the yardstick that had started it all, and handed it to the boy.

I don’t know if I’ve ever been so proud of him.

The teacher explained to me that every kid in the class knew that yardstick was Isaac’s signature. In the way that only 11-year-olds understand, every kid has a signature: he’s the guy with that bike, she’s that girl who can burp the alphabet, he’s the kid who holds the yardstick during Social Studies. They knew no one touched the yardstick but Isaac. So when he handed it over to this boy who was about to become a target of ridicule, he signaled to the rest of the class that it wasn’t going to go that way. Instead, they were going to choose kindness. And they did. They stopped laughing, settled down, and class carried on as usual.

My son wasn’t a cool kid. He was kind of nerdy—I mean, his signature was holding a yardstick, okay? His only street cred in the hallways of his middle school was his innate kindness. It turns out, that was enough.

I’m not sure kindness is something we can teach. At least not as its own entity. Instead it’s the expression of a handful of other values that we instill in our children—empathy, compassion, and the knowledge that every human being is created in the image of God and worthy of love and care. It shows up in the nice things we do for others, yes, but also in how we talk about them when they aren’t around or the patience we show them or the deference we give to their needs. It’s a posture we take toward others that’s born out of a belief that we are part of the same family of God.

When we recognize our shared humanity in other people, how else can we respond to them but with kindness? What else would we do but extend ourselves to them in whatever ways they need us to? 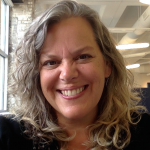 CARLA BARNHILL has been involved in publishing for more than 20 years. She is the former editor of Christian Parenting Today, the author of The Myth of the Perfect Mother, and the editor of numerous books for children and families. She is the Senior Director of Development and Product Design at Sparkhouse, and the mother of three truly kind children.

Carla Barnhill is the vice president and publisher of Sparkhouse and the creator of the Dialogues On series of adult small group resources that help churches have challenging conversations around important topics.