I remember the first time I caught my mom in a lie. To be honest, I don’t remember the particular details of the experience; I don’t even remember what the lie was about. What I do remember, however, is the look on her face when she realized the gig was up. It’s the one image that was burned into my memory. I could see it in her eyes. I knew she was lying. She was busted and she knew it. And, she knew I knew it.

The way I see it, in that moment, she had three options. One, she could stick to her story, no matter the cost. Captain going down with the ship stuff. Two, she could take the high road, admit what she said wasn’t true and apologize for not being honest. Or, three, she could send me to my room and pretend to this day that it never happened.

Want to guess which one she chose?

Fortunately, after seventeen years of parenting, I’ve never found myself in a situation where I needed to choose between those equally unpleasant options. To be clear, it’s not because I’m so holy and never lie to my kids. If I had to guess, I’d say that I’ve told an average amount of lies to them over the years. Nothing really horrible, but tiny instances of dishonesty nonetheless. Truth be told, we all do it. We just don’t all admit it.

I think that fact alone is what makes the topic of honestly so difficult to deal with when it comes to children. It seems like an all or nothing kind of virtue that is often reduced to simply: don’t lie or cheat or steal, or at least that how it seems when it comes to parenting.

Let’s face it, we all want to raise our children to be honest people. We’d prefer that they always tell the truth and never cheat at anything. But, at the same time, we also know that life doesn’t necessarily work out that way. Sometimes we tell little fibs with honest intentions. Sometimes we tweak the truth to save someone else from embarrassment. And sometimes, without a doubt, there are times in our lives when we tell bold faced lies for no good reason at all.

So then, how do generally-honest, Christ-loving parents guide their kids toward a life of honesty? I think the first step is to be honest with ourselves. We have to first realize that the desire to deceive is a part of being a human in a fallen world. Just because we have kids, doesn’t mean that desire goes away. This self-reflection is the first step to teaching kids about what it means to honest. Acknowledging the desire to be dishonest in an open (and honest) environment helps us to experience God’s abundant grace. Approaching honesty in this way helps shape your child’s sense of the virtue for the long haul, rather than in one instance. Teaching kids that honesty isn’t a virtue destroyed through one instance of deceit, but that it’s a way of living that is nurtured over the course of a lifetime. Cultivating honesty begins with us being honest with our children about the challenges of living lives as followers of Christ. 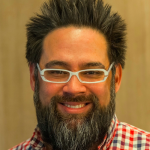 JASON  BRIAN SANTOS is the Mission Coordinator for Christian Formation (Christian education, children, youth, college, young adult, camps and conference ministries) at the Presbyterian Mission Agency. He is an ordained teaching elder in the PCUSA and holds a Ph.D. in practical theology from Princeton Theological Seminary. He is the author of A Community Called Taizé (IVP, 2008) and After Paradise (IVP Academic, forthcoming). He currently resides in Louisville, KY with his wife, Shannon and his two sons, Judah and Silas (aka Tutu). In his spare time, he plays and designs board games.

Rev. Jason Brian Santos, Ph.D. is the pastor of Community Presbyterian Church, a small mountain congregation located in Lake City, CO. He’s an ordained teaching elder in the Presbyterian Church (USA) and for the last five years he served as the national director for Christian Formation for the PC(USA). He holds a Ph.D. in practical theology from Princeton Theological Seminary, where he also earned his Masters of Divinity. He is the author of A Community Called Taizé (IVP, 2008). He currently resides in an almost 150-year-old historic church manse in Lake City, with his wife, Shannon, and his two sons, Judah and Silas (aka Tutu). In his spare time, he plays and designs board games.