Failure: Nothing to Fear 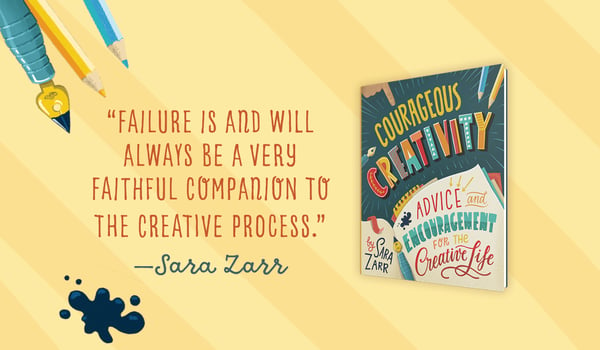 Failure is a word people often use as a weapon against others, or we use it against ourselves. We might say or think, “I am a failure.”

That’s a very harsh thought about your identity, and also—it can’t possibly be true. No one is “a failure.” The things we do can fail, and sometimes we feel disappointed about our creative output, but we are never failures. We have inherent dignity and value. The more we can grasp that truth, the better it can carry us through the experience of failure.

Because yes, a creative project can be a failure. In fact, not only can a project fail; it will fail. And I’m here to tell you that it’s nothing to be afraid of. Failure is and will always be a very faithful companion to the creative process, so you might as well accept it and make it your friend.

Rather than using the word failure as a weapon or accusation or identity, I think of it as a word to describe the distance between how we want our creative projects to turn out and how they actually turn out. Every project starts with an idea. And when it’s an idea that lives inside your imagination, and you don’t tell it to anyone or try to make it exist, it’s perfect.

The moment you start the work of bringing it out of your imagination and into some external expression, it fails. It just does!

When I wrote my first novel, I knew how it all worked in my head and what I wanted the end result to be. But I’d never written a book before, so I didn’t know what I was doing! I had no clue how to fix the problems with my writing that sprung up like weeds all over the pages. When I compared the finished result to the idea in my mind, the book was a failure. It wasn’t good enough to be published, and I didn’t know how to make it better.

But I was not a failure. I’d set out to write a book, and I did! Then I succeeded in writing two more books that were also failures, before I wrote one that succeeded in getting published. That book wasn’t perfect either. In some ways I was happy with how it turned out but in others I wasn’t, and some people liked it and some didn’t.

Every time I get a new idea for a book, it’s perfect! It really is. It shines and shimmers in the light of my imagination. The story has no weak spots, and the characters are all complex but lovable. This is the one, I think. This time, it will all pour out of me and stay perfect the whole way through.

Spoiler alert: It is never the one. It never stays perfect.

Every single one of my published books fails in some way to live up to what I wanted it to be. I do think that the more I write and the longer I practice, the better I get at closing the distance between my idea and the finished work. But then my ideas get more complicated too, and the gap widens once again.

I don’t mean to minimize the fear of failure. It can be powerful! I’ve learned to live and work with failure sitting right next to me, but that doesn’t mean I don’t get afraid of it sometimes. That fear is at the root of a lot of the obstacles I and many others face when trying to show up for our creative practice, no matter how accomplished we might be or how many projects we’ve finished before. We may not even be conscious of it.

Here’s how it can play out:

You write a sentence or line or paragraph or page, and almost immediately the mortification sets in. You look at it and think, Oh no, oh no no no NO, this is not at all how that was supposed to come out. You start your epic sketch of a flying horse and it’s not going great, and a friend looks over your shoulder and you hunch down and cover your paper and hiss, “DON’T LOOK.” You’re working out a song on your guitar and your dad knocks on the door and says, “Hey, whatcha working on?” and you want to tell him to go away, please, now. Or you share your idea with a friend, who stares back at you with a skeptical look and says, “I don’t get it.”

It’s often the idea of someone else seeing and judging what we’re doing that aggravates the fear of failure, but it can also happen with just you alone in a room. Dealing with the reality of the distance between what you imagined and what it is can produce anxiety. It stirs up those feelings of failure—which we’ve been taught to be afraid of. We’ve been taught that failing is bad and something to be avoided, when in fact it is just part of the process. 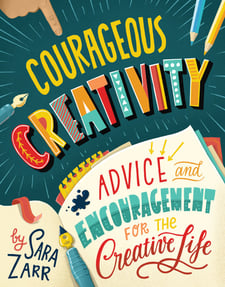 Sara Zarr is the acclaimed author of seven novels for young adults, most recently Goodbye From Nowhere. She’s a National Book Award finalist and two-time Utah Book Award winner. She divides her time between Utah and California.