Tips to Encourage Kids to Let Their Dreams Soar 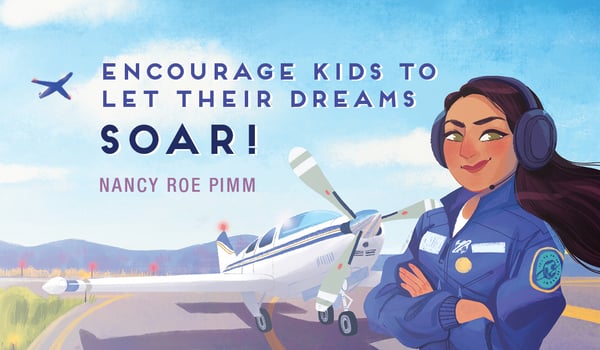 Let’s face it: Children dream big. At least they should! How can we encourage them to follow their hearts and chase their dreams? Nancy Roe Pimm, author of Fly, Girl, Fly!: Shaesta Waiz Soars around the World shares her tips for inspiring kids to believe in their dreams.

Let their dreams soar. To kids, everything is possible. I remember my three-year-old daughter Lindsay telling me she wanted to become a unicorn when she grew up. Although Lindsay’s dream was a fantasy, it demonstrates how a young child’s mind believes anything is possible. They are not afraid to dream. They yearn for anything and everything. But as they grow older, some kids learn otherwise. Unfortunately, they learn to doubt, to fear, and to settle. I wanted to be an author when I was ten years old, and I wrote my first nonfiction book, titled Horses, Horses, Horses. But as I yearned to follow my dream, I was warned of how impossible it would be to get published. My mom, a former librarian said, “You need a real job.” So I settled. I went to college to become a dental hygienist. Now, eight published books later, I can say dreams do come true—even ones that seem impossible.

Be their biggest cheerleader. Dreamers usually encounter naysayers. But as parents and caregivers of these little people, don’t we owe it to them to encourage their aspirations? And why not dream big?! Like, really big! I’m not talking about impossible like becoming a unicorn. I’m just saying that we should never tell our children that their dreams are unachievable. Walt Disney once said, “If you can dream it, you can do it!”—wise advice!

But just dreaming isn’t enough. We need to encourage our kids to work hard for their goals. Let’s be their biggest cheerleaders! Be sure to let them know that life is not always fair, and some doors may shut, but we must keep knocking until a door opens. Some might argue that you shouldn’t encourage your kids to chase after really big dreams because it sets them up for disappointment or even failure. But isn’t failure our best teacher? I think we should tell our kids that each failure is a steppingstone to success. After all, you grow through what you go through.

Challenge the possibilities. As a young boy, my husband drove his go-kart around the circular driveway in front of his elementary school, pretending to race in the Indianapolis 500. As he got older, some people laughed at his aspirations, not believing that a former farmer could make it in the big leagues of auto racing as one of the top thirty-three drivers in the world. He not only raced in the Indy 500; he also raced in the Daytona 500. As a young boy, Wayne Lane wanted to be a pilot. Some days, he’d tie a string from the curtain rod to a chair, then attach two hooks to the top of his model airplanes and gaze at them soaring through his living room. At his local library, he read books about faraway places. In 1971, it was unusual for a Black man to pursue a career in aviation. But Wayne focused on his dream and became Captain Wayne Lane.

The youngest man to fly solo around the world was a Black refugee from Jamaica. Barrington Irving grew up in an impoverished area, and he built his airplane from spare parts. Just like Barrington, Shaesta Waiz soared into history as the youngest woman to circle the globe in a single-engine airplane. A refugee herself, Shaesta overcame racial discrimination and poverty to follow her dream in becoming the only female from Afghanistan to fly around the world. Shaesta also fought through gender-roles beliefs as family members told her that girls did not belong in the cockpit of an airplane. Shaesta is living proof that with hard work, perseverance, and determination, you can achieve anything! 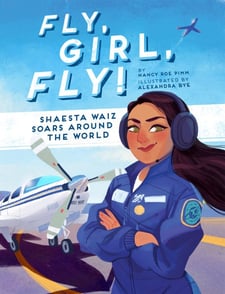 To help encourage your children to believe in their dreams and to challenge the possibilities, check out Fly, Girl, Fly: Shaesta Waiz Soars around the World, the first picture book biography of Shaesta Waiz and her incredible journey around the world.

Nancy Roe Pimm is an award-winning author of many books and articles for children. In addition to Fly, Girl, Fly!, Pimm is the author of the middle-grade biography The Jerrie Mock Story: The First Woman to Fly Solo around the World. She and her retired racecar-driver husband Ed Pimm live in Plain City, Ohio. They have three daughters and two grandsons. Nancy and Ed share their home with two dogs, one cat, and one snake.