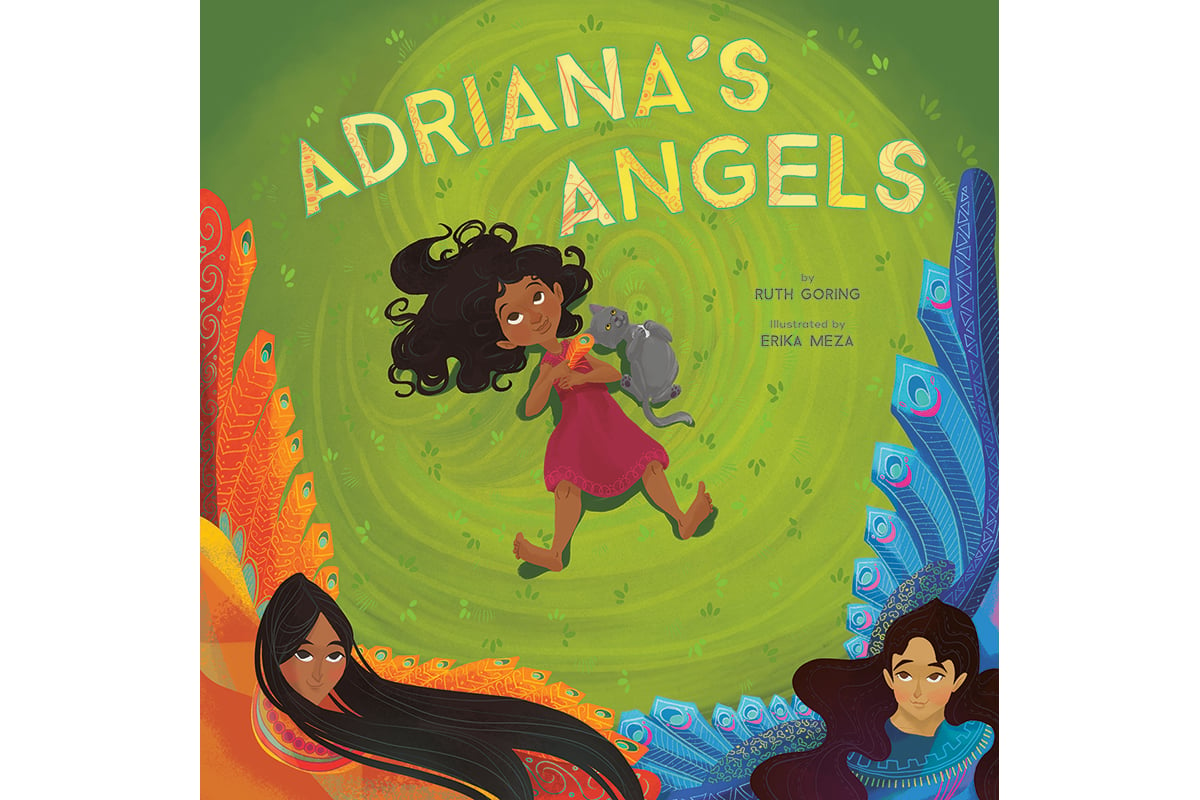 What would it be like to have your happy childhood interrupted when your family is forced to flee violence? What might God have to say to a child who has been uprooted from all that is familiar and is struggling to fit into a new culture and a new home?

Adriana’s Angels by Ruth Goring and illustrated by Erika Meza is a new Sparkhouse Family picture book that imagines answers to these questions. The story follows a young Colombian girl whose family is forced to flee their home and make a new life in Chicago. All the while, God watches over her and sends her messages of love and comfort through two guardian angels. This book was inspired by a true story of a family that the author knows personally.

The situation the real Adriana’s family faced is familiar to 65.6 million forcibly displaced people worldwide. One day you’re experiencing life as usual, and the next day you might be frantically packing what you can carry and fleeing to safety.

Since there are so many different types of displaced people, I thought it might be helpful to define some terms. I’ve gathered this information from the United Nations Refugee Agency.

Immigrant: A person who leaves their country of origin and starts a new life in a new country. People immigrate for all sorts of reasons.

Refugee: A person who flees his or her country because of persecution, war, or violence. A refugee has a well-founded fear of persecution for reasons of race, religion, nationality, political opinion, or membership in a particular social group. They cannot return to their home country or are afraid to do so. When a person is granted refugee status by the UN, international law dictates that they must not be returned to situations where their life and freedom are at risk. Refugees are given the opportunity to apply for resettlement in another country, where they can live permanently.

Internally Displaced Person: A person who was forced to flee his or her home for the same reasons as a refugee, but remains in their home country and has not crossed an international border. IDPs are not protected by international law.

Asylum Seeker: A person who has fled their home country and seeks shelter and safety in another country. They apply for asylum, or the right to be recognized as a refugee and receive legal protection and material assistance. They must demonstrate that their fear of persecution in their home country is well-founded.

The real Adriana’s family were asylum seekers. Her parents worked for peace and justice in Colombia and were threatened by some violent people. They had the means to travel to the United States to find safety, and once they were here they applied for political asylum. They were granted asylum and were given permission to live in the United States permanently.

In the story, Adriana’s two angels delight in conveying God’s love and comfort to her as she experiences so much change. One of my favorite parts of the book goes like this: 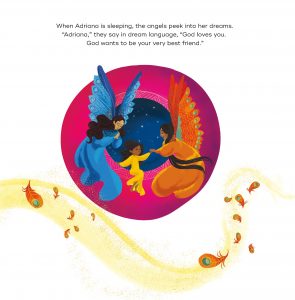 When Adriana is sleeping, the angels peek into her dreams. “Adriana,” they say in dream language, “God loves you. God wants to be your very best friend.”

And it’s true! God loves all people and has special concern for the vulnerable and displaced. Over and over again the Bible gives us God’s commands about caring for people such as these.

“[The Lord] defends the cause of the fatherless and the widow, and loves the foreigner residing among you, giving them food and clothing. And you are to love those who are foreigners, for you yourselves were foreigners in Egypt.” – Deuteronomy 10:17-19

If you or your family wants to get involved in serving refugees in your community, find out if there are any refugee resettlement agencies you can volunteer at. Many refugee resettlement agencies are Christian and work to empower the local church to serve immigrants and refugees. Look for organizations affiliated with Lutheran Immigration and Refugee Services, Episcopal Migration Ministries, Church World Service, United States Conference of Catholic Bishops, or World Relief. You might even consider donating a copy of Adriana’s Angels to welcome a newly arrived family!

Adriana’s Angels and its Spanish edition, Los ángeles de Adriana, are available wherever books are sold on September 12.

US Refugee Resettlement Agencies: Voluntary Agencies
United Nations Refugee Agency: Who We Help
What is a refugee: UNRefugees.org
History of refugee resettlement in the US: Refugee Council USA
Refugee Admissions: The US State Department

Naomi Krueger is a development editor at Sparkhouse Family, and was the acquiring editor for Adriana’s Angels. She also serves on the board of directors for a refugee resettlement agency in Minnesota. She lives in the Twin Cities with her husband and son.

You can learn more about Ruth Goring and her book at www.RuthGoringBooks.com.

Naomi is an acquisitions editor at Beaming Books, the children’s book imprint of 1517 Media. She lives near Saint Paul, Minnesota with her husband and little boys. You can follow her on Twitter @NaomiJKrueger or visit her website at naomikrueger.com.