7 Reasons to Care About Martin Luther 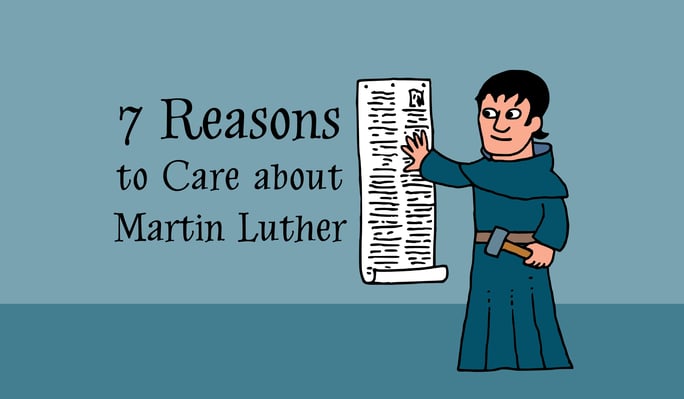 Did you know that in 2017 we celebrated the 500th anniversary of Martin Luther and his 95 Theses? You don’t have to be Lutheran to care about this important moment in the history of the Christian faith. The changes that Martin Luther brought to the world sparked the Protestant Reformation and have effects that trickle down to people of all denominations today.

Here are 7 reasons we should all care about Martin Luther:

Luther’s translation of the Bible into German was a pivotal moment in the spread of literacy—thanks, in part, to the timely invention of the printing press. From 1517 onward, religious books and pamphlets flooded Europe. Reading wasn’t just for scholars, monks, and priests anymore.

You are a woman or you care about women.

Martin Luther contributed to the rising status of women. For his time, Luther was progressive. He believed that girls should be taught along with boys.

In Luther’s time, singing belonged only to priests and monks. Thanks to his influence, ordinary laypeople began to lead singing, which inspired great composers. Luther held that music was next to theology in its importance.

Luther believed in the spiritual equality of all believers. He taught that God is equally accessible to all the faithful, and that every Christian has equal potential to serve God.

You care about family.

Luther, along with other Reformation thinkers, elevated marriage and family. He and his wife were devoted to one another, and he preached many sermons praising marriage. And although there were monks who were legally married before Luther, his marriage to Katharina Von Bora in 1525 helped pave the way for clergy to marry.

You are a history buff.

It is impossible to understand modern history apart from Martin Luther and the Reformation. For example, the Pilgrims may never have settled here in America if there had not first been a Protestant Reformation.

You realize that reformation continues today.

Martin Luther taught that faith is not static. As believers, we recognize that we are in constant need of reformation. We are changed and we are changing.

Are you interested in learning more about Martin Luther? The Life of Martin Luther: A Pop-Up Book is an interactive retelling of his life and his role in sparking the Protestant Reformation. This accompanying Sunday school lesson download is a fun and helpful guide to further engage kids in the story.

Kiersti Trautman is the marketing manager for Beaming Books. When she isn’t launching marketing campaigns or chasing her preschooler and toddler, she enjoys being outdoors, reading, and exercising in her basement.